This is an excellent article written by a friend of mine. View it here. 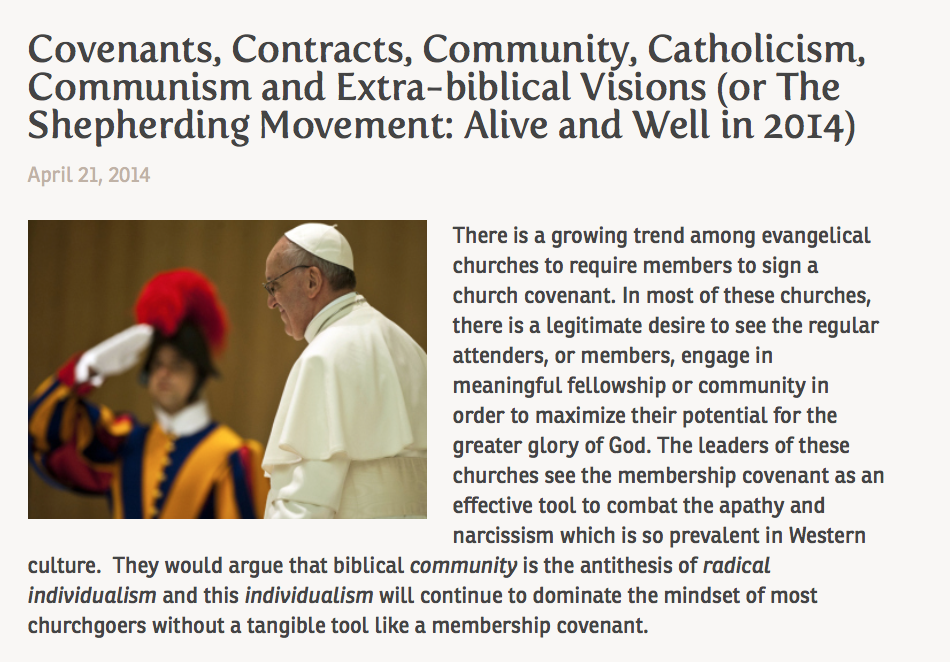 Thanks for your comment Sarah. I too have seem membership covenants horribly abused at my former church, United Christian Church of Dubai. I would never again join a church that utilizes them. Just recently a good friend of mine was excommunicated from UCCD 3 months after he resigned. His sin? He refused to join a “church” that meets with the approval of UCCD. (He has chosen to meet with like-minded fellow believers in homes.

I want to come back and read this later when I have more time. Interestingly enough, a local (to me) megachurch is going through its own court trial regarding sexual abuse by a counselor with a woman he counseled. I’m fascinated by the trial because I used to work at this church and know that there are some pretty shady goings on and favoritism (they fired me, which is kind of a badge of honor).

A main point in the trial has been this “membership covenant” that the victim supposedly signed where she waived her rights to take the church to court. This is their defense. There’s no concern for her allegations of abuse or the predatory actions of the counselor, just, you promised you wouldn’t sue us and the church can handle this internally. It is disgusting. As evidence, they’ve submitted the membership booklet she signed (which destroyed her anonymity as she had gone to court as “Jane Doe” but her name and family’s names were explicitly written in the booklet which then became public record). They insist that she was informed about this fact during the membership class but I also took that membership class and I can vouch for the fact that I was never told it was a legally binding document, never told I was waiving my legal rights, and this part of the booklet was definitely glossed over and described in euphemistic terms like “you want to respect the leadership of the church, right? Of course you do.” The church is also arguing that though she says the lead pastor never presented this information or even led the class, that he taught the whole thing. We attended classes the same year and before it began, my session was also told the lead pastor would teach the class and he did not show up until the final 20 minutes of the second session. The whole class was led by an associate pastor.

…I’m honestly not sure why I typed all this in your comment box, as I intended it to be a bit shorter and to the point on membership covenants, but mostly I am saying this to affirm, YES, THEY ARE SUPER SHADY, and from what I can see of this article it was spot on, and I am looking forward to reading the whole thing when I have time.

Also you called me young in a more recent entry and that is rapidly happening less and less, so thank you!

Reply
Revival, Brown-nosing and Control at Sovereign Grace Ministries | Thou Art The Man

[…]  I would never again join a church that has as a requirement to sign one of these.  (See this great article on membership contracts.  And here is another one.) Add to this some invasive software program and I would caution you to […]