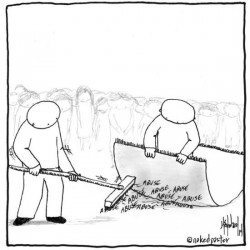 I came across this insightful article today. It is a few years old but worthy of a review.

“It’s no accident that so many allegations of serious abuse have arisen across SGM’s churches. The combination of patriarchal gender roles, purity culture, and authoritarian clergy that characterizes Sovereign Grace’s teachings on parenting, marriage, and sexuality creates an environment where women and children—especially girls—are uniquely vulnerable to abuse.”

“At its root, abuse is the harmful exercise of power over others. Submission theology protects the privileges of the powerful; as a result, abuse survivors in submission cultures are not able to fight effectively for support or accountability. It is possible that victim advocacy is inherently impossible in a culture like SGM’s.

Some former Sovereign Grace members hold out hope that exposing these abuses will substantially change the cultures of the church, or at least damage their reputation and influence. Judging from recent scandals in both Catholic and Protestant churches, I’m skeptical.

Indeed, SGM’s own current crisis has so far had little to do with accountability for perpetrators or justice for victims. Rather, it’s the culmination of longstanding power struggles and grudges between the influential men who have led SGM—some of the same men accused of covering up for abusers or being abusers themselves.”

Read the complete article at the link below:

Source: A Church Group, a Lawsuit, and a Culture of Abuse