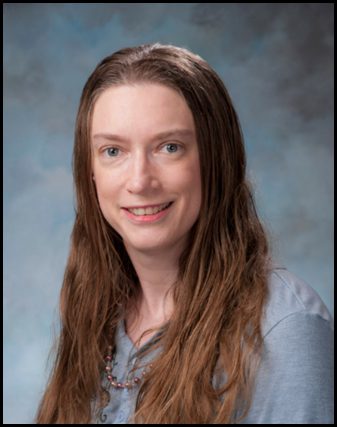 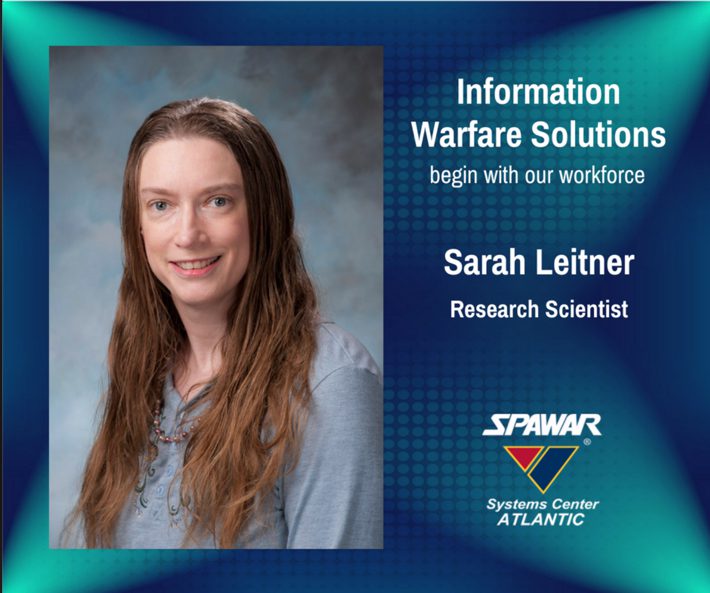 For a little background, Jerry Falwell Jr., the controversial President of Liberty University, has found himself in trouble again this past week for publishing the Tweet below. 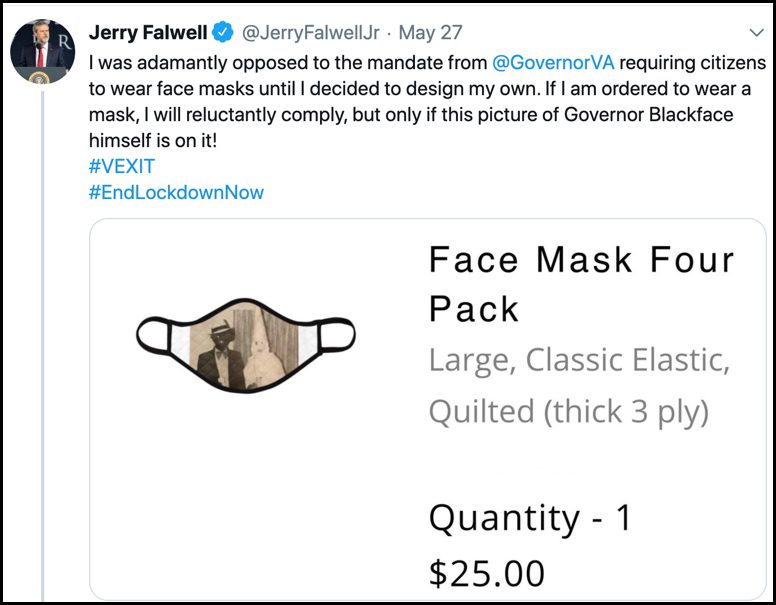 The tweet triggered 35 Africa-American pastors who are graduates of Liberty University to send a strong letter of protest to Jerry Falwell Jr. In addition to that, a petition calling for Falwell’s resignation has been initiated and has garnered over 28,000 signatures to date. 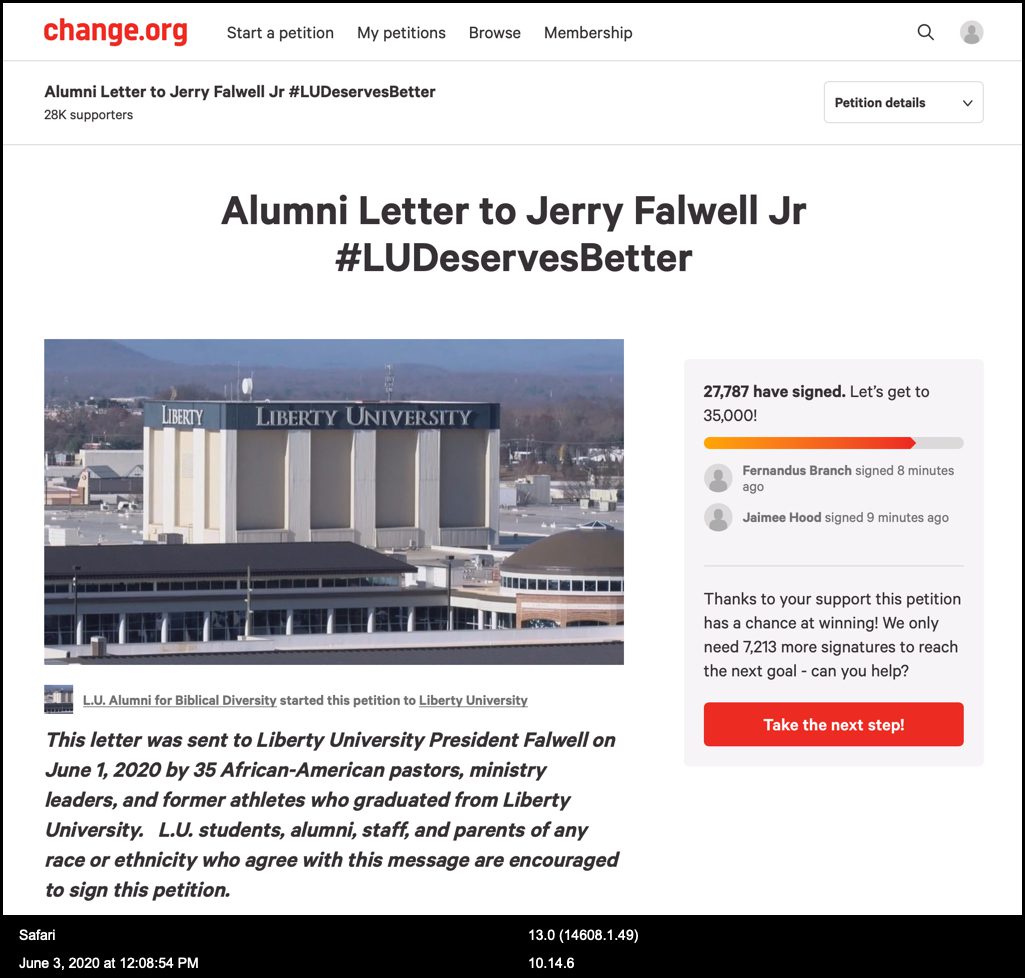 For more information about this story, I suggest you read an article published by Julie Roy titled, “African American Alumni Call for Resignation of Liberty President Jerry Falwell Jr.

“Faced with outrage from black alumni and the resignation of at least three African American staffers, Liberty University President Jerry Falwell Jr. has deleted and apologized for a two-week-old tweet that showed a face mask decorated with a photo of a person in Ku Klux Klan robes and another in blackface.

The images were intended to mock the mask requirement implemented by Virginia Gov. Ralph Northam (D), who nearly resigned from his office last year amid revelations that the racist photo had been featured on his medical school yearbook page.

But it upset many of the African American students, staff and alumni at Liberty, which was founded in Lynchburg, Va., in 1971 by Falwell’s father, Jerry Falwell Sr., and is one of the largest Christian universities in the world.

LeeQuan McLaurin, who began as a student at Liberty in 2012 and has worked there since, resigned from his position as director of diversity retention last week. He said in an email that Falwell’s tweet on May 27 was a tipping point of larger racially related problems that he has experienced at the school, which he said have contributed to a drop in Liberty’s residential undergraduate African American population from 10 percent to 4 percent between 2007 and 2018.”

My article is the story of one woman’s struggles to obtain fair treatment from Liberty University in her pursuit of a Ph.D. in Counselor Education and Supervision.

In early May 2020, I received an email from Sarah Leitner stating in part that she had endured abuse from her supervisor at a government institution where she was undergoing her doctoral internship in counseling. Sarah claims her reports were ignored, she was not pulled out of the internship site as requested, and Liberty University denied the abuse occurred even though no one from Liberty University was there. Afterward, Sarah reported what she believed to be illegal activity to the University’s lawyers, Title IX department, and to Liberty’s whistleblowing department. She faced retaliation as she was expelled from the Ph.D. program and no longer used as an Adjunct Faculty at Liberty University.

Sarah said that when “illegal activity is reported it requires an investigation” and, “as a Navy Research Scientist for more years than I’d like to admit, I have never seen an ongoing series of events showing such disregard for the safety of others, ethics, and the law.”

Here is a synopsis Sarah Leitner wrote of her experience as a Ph.D. student and as Adjunct Faculty:

From Fall 2015 to February 2016, as a Ph.D. in Counselor Education and Supervision student, I was a counseling intern at a Navy brig. Due to my site supervisor’s actions, I feared for my life on two occasions, leading to PTSD. Many other occasions were filled with lower levels of abuse. Simultaneously, my daughter’s mental crises worsened leaving me with constant crises at an abusive internship site and constant crises at home.

Dr. Pride, the Clinical Supervisor at Liberty University and part of the leadership of the Counselor Education and Supervision program, refused to assist, even as I described the unsafe situation in multiple emails, including an email in mid-February 2016 where I explicitly stated I was not safe. Often it seemed as if Dr. Pride did not read my emails as he responded late or not at all. Sometimes he would respond to crises with irrelevant statements, such as how busy he was, instead of responding and/or removing me from the internship site. When I resigned from the site in February 2016, Liberty University continued to deny the abuse had occurred. I wondered how a professor who was supposed to have at least some experience with counseling trauma could miss the traumatic experiences I was undergoing, experiences that made me feel as if I was an indentured servant at the internship site.

In Fall 2016, after asking for an investigation from the department, Title IX, and multiple other departments of the University, I reluctantly went to a second internship site. Simultaneously, in Fall 2016 I filed a complaint with the Inspector General for the Bureau of Personnel (IG BUPERS) and again attempted to file Title IX within Liberty University. The Interim Dean of the School of Behavioral Sciences, Dr. Warren, agreed, in writing, to postpone the final grade appeal until the IG Report was complete.

However, Dean Sosin, part of the Ph.D. program’s leadership, falsely told the IG that I had not reported abuse until I left the internship site. Based on this as well as statements from the offenders, the IG closed the complaint in late December 2016.

Simultaneous to the IG investigation, in November 2016, I attempted to withdraw from the internship course, now taught by Dr. Deacon, due to the PTSD and my daughter’s quickly deteriorating mental health. The request was quickly denied. I was forced to continue the internship. I would find out later that Dr. Sosin had told the Investigator that I had not said I had been abused at the site while I was at the internship, despite the many emails I had sent to her and the department.

Around December 5, 2016, days after I found out my child was not safe at school and had been assaulted daily at camp in Summer 2015, Dr. Sosin and the leadership of the Ph.D. program – likely Dr. Deacon and Dr. Pride – sent me a letter of concern with many inaccurate statements. The letter also stated that all of my grade appeals were over even though one was remaining. When I emailed Dr. Sosin, I was not allowed to dispute the inaccuracies. I abandoned the last, final appeal with Dean Warren because I believed I would be expelled if I continued that appeal.

In Fall 2017, the official grade appeal process was completed. I attempted to file with Title IX on at least two more occasions. In early Spring 2019, due to a FERPA request, I received additional documentation from Liberty. The documentation I received from Liberty University due to my FERPA request was extensive, repetitive, often incorrect, and missing key details. Thus I do not believe this documentation was in compliance with federal law. I also found out, much to my surprise, that Liberty University had decided I had been “unethical” because I didn’t have a license as a counselor – when I did have one!

As my attempts to seek justice and to ensure the safety of future Liberty University students, I emailed Jerry Falwell on October 21, 2018, notifying him that I had been “ordered to return to an internship site where I was not safe,” and “was not allowed to withdraw from the internship course when I found out my child was not safe at school and had been sexually assaulted every day at camp 15 months earlier.” Furthermore, I asked Jerry Falwell, “How is it okay that mentioning a safety issue means I went round and round with the university and no department at the University has authority to do anything?”

Jerry Falwell responded on October 25, 2018, stating: “I have looked into this situation and understand that there are several trustworthy people at the University that have already been diligent in working with you. …” – which left me wondering who these people were.

On October 26, 2018, David Corry, general counsel for Liberty University, responded to Sarah via email, stating: “…I am also aware of your allegations regarding our faculty interactions with the Inspector General… We are satisfied that at this time all your concerns have been handled and addressed appropriately…. Under the circumstances, any future communications you send may not be responded to by the University. We wish you well.”

Sarah stated to me that “being wished “well” seems especially hurtful after all the times the University had kept me from being well.”

At this point, Sarah’s only option available to obtain an equitable outcome to her unfair treatment at the hands of Liberty University was to file a lawsuit. To this end, she enlisted the help of an Expert Witness, Dr. Charlotte Murrow Taylor. Dr. Taylor wrote an excellent report, the contents of which leaves one incredulous at the treatment Sarah received from Liberty University.

Dr. Charlotte Murrow Taylor’s complete report may be viewed here. Below are screenshots of pages 1-4 from the report. 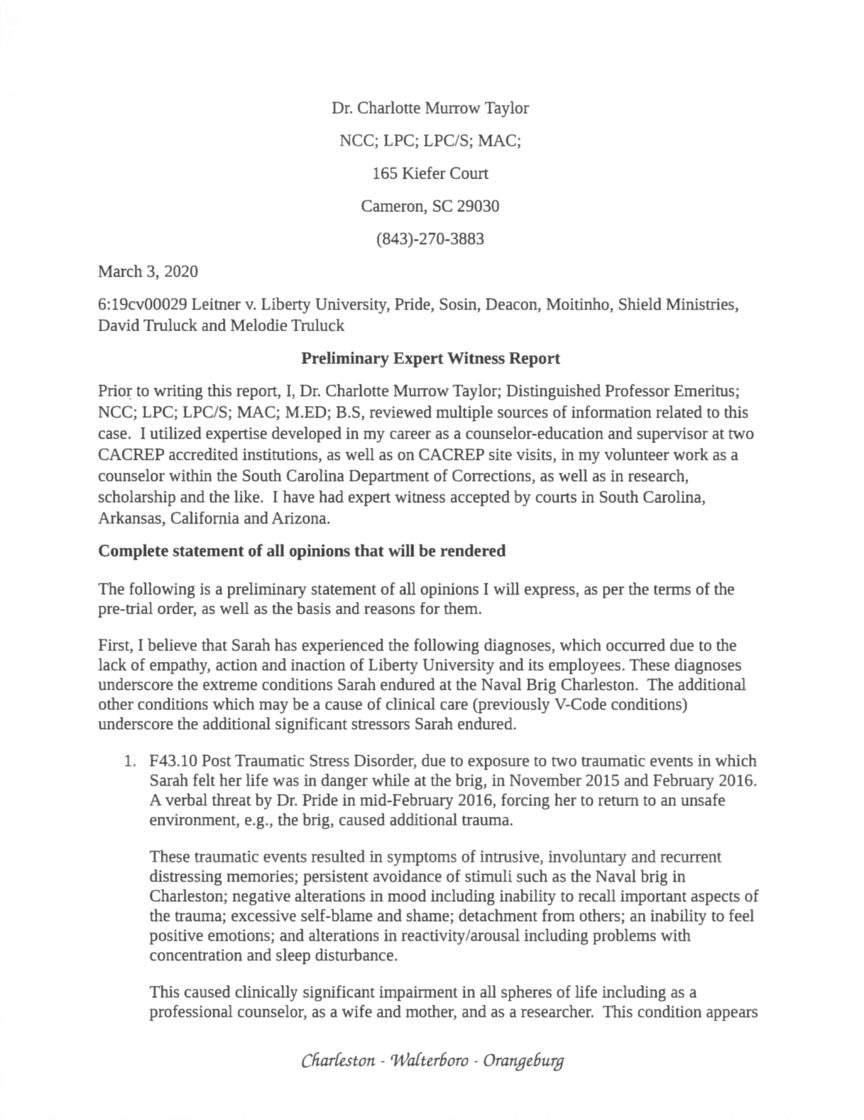 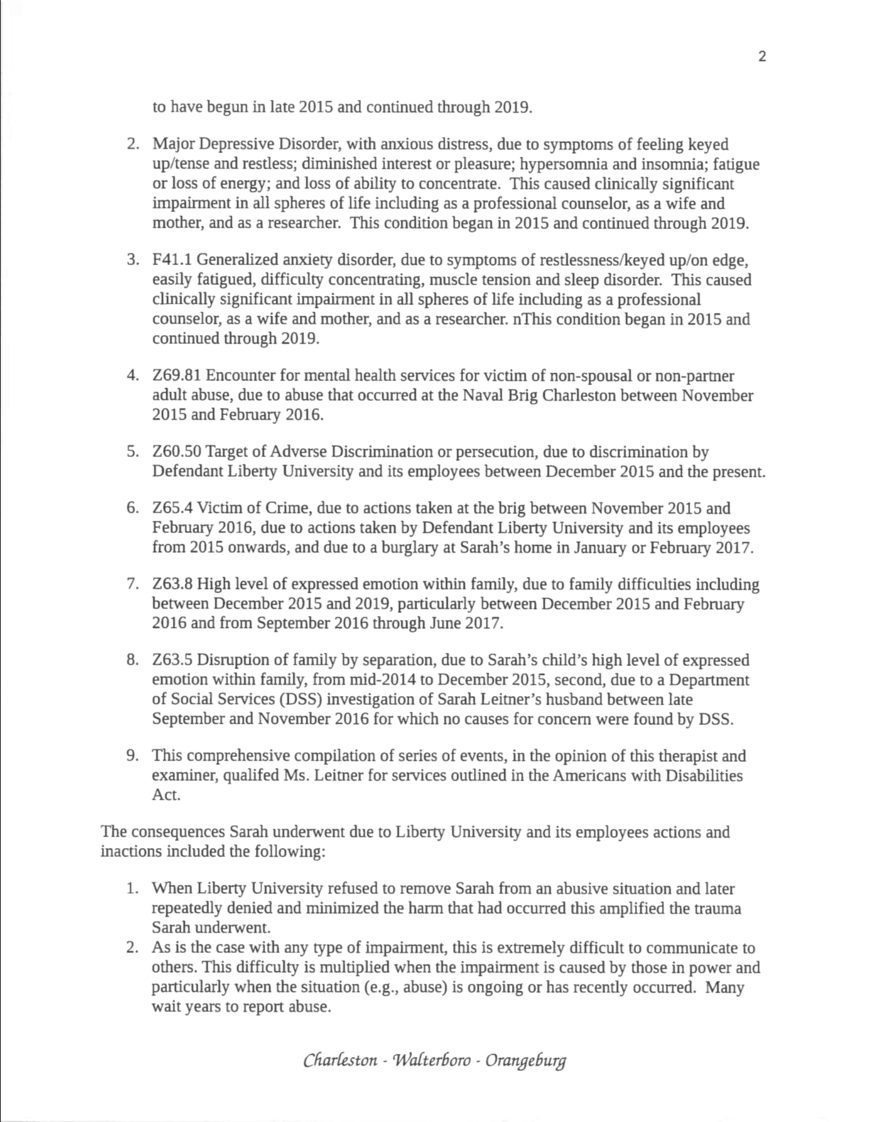 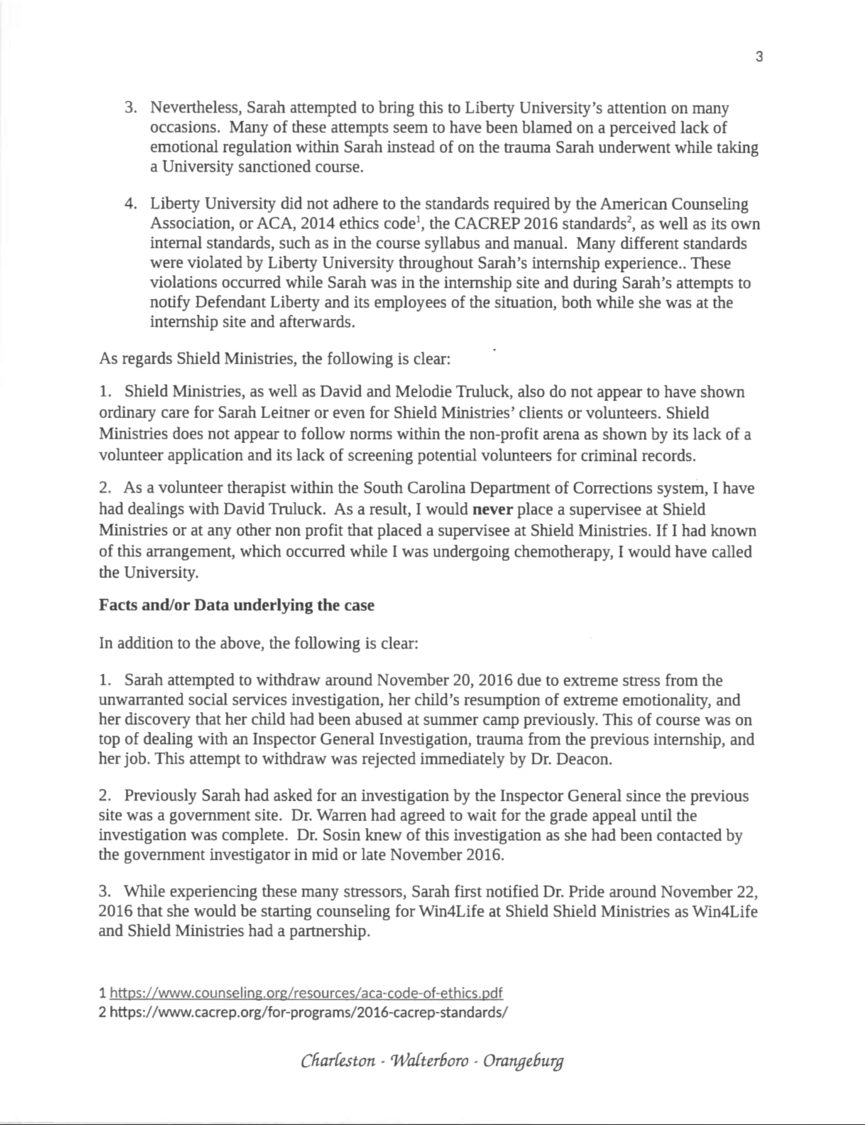 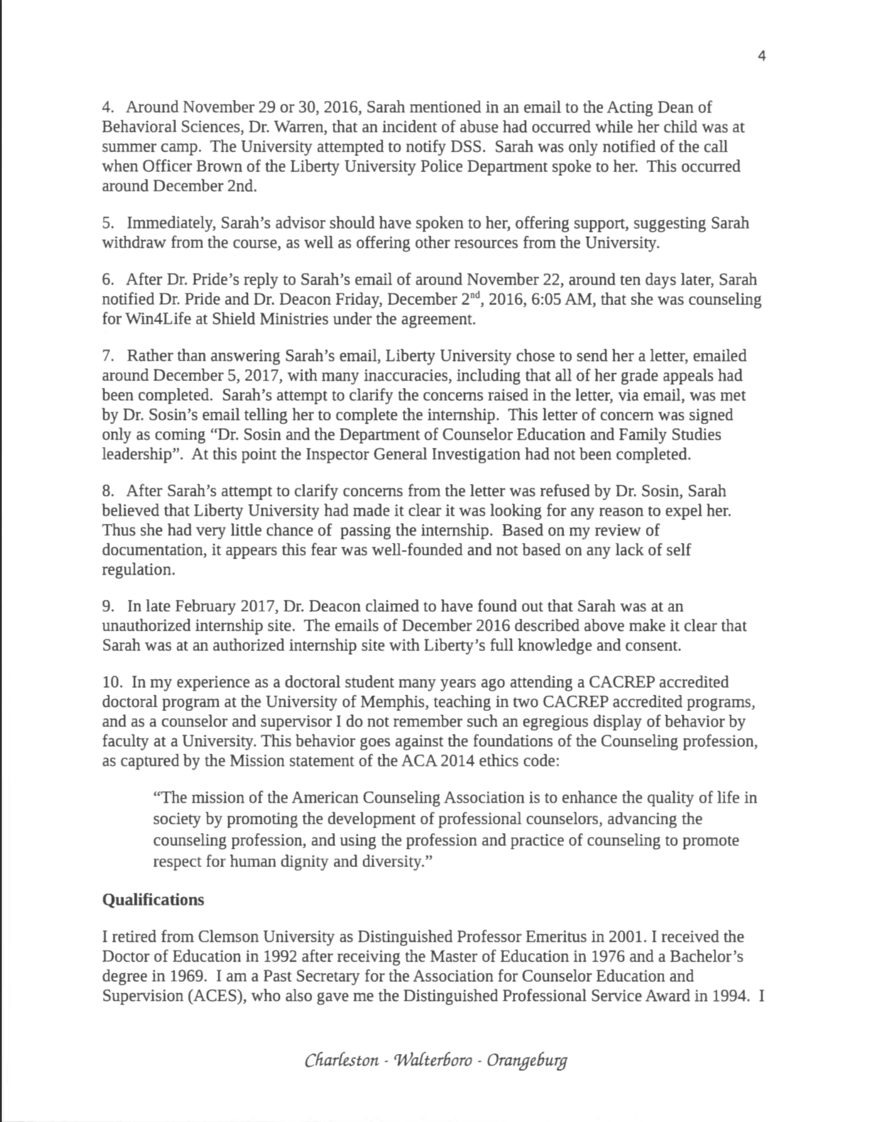 We join Sarah Leitner in asking Jerry Falwell, “How is it okay that mentioning a safety issue means I went round and round with the university and no department at the University has authority to do anything?”