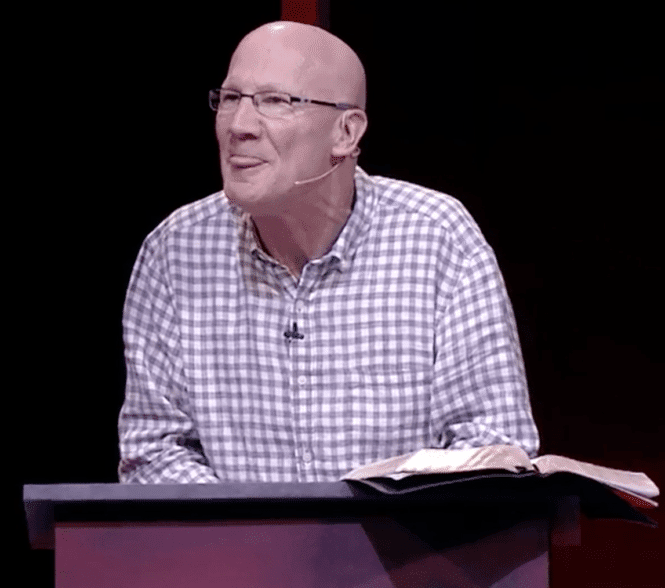 “C.J., in getting ready to introduce him, I decided I would Google to see if there was anything on the internet about him. (Laughter from the crowd.) And that’s where I discovered, having discovered this on the internet, that C.J. cheers for the Washington Redskins and the Washington Nationals, and against the Dallas Cowboys, the New York Yankees, and Duke basketball. (Cheering from the crowd.) That is a section that is entirely missing from any biographical material on me. (Laughter from the crowd.) But I now know it to be true because I read it about C.J.”
-Dr. Albert Mohler, Introducing his good friend C.J. Mahaney at T4G. 4-12-2016

“Deception is part of sin’s DNA. Sin lies to us. It seeks to convince us that sin brings only pleasure, that it carries no consequences, and that no one will discover it. Sin works hard to make us forget that character, conduct, and consequences are interconnected. And when we neglect this relationship—when we think our sins will not be discovered—we ultimately mock God.”
-C.J. Mahaney 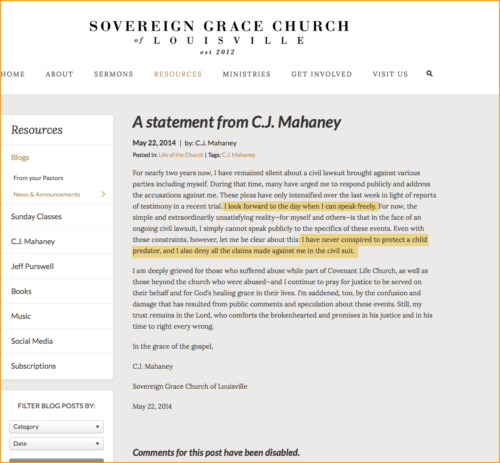 Google “Mahaney statement contradicted by Wallace and Happymom” and you will find the statement below. I now know it to be true because I read it about C.J.

Google “Mahaney  Kiawah Islands” and you will find Mahaney’s silence on abuse was rewarded by a paid vacation to the Kiawah Islands. I now know it to be true because I read it about C.J.

157.  Rather than report the ongoing abuse to the secular authorities or take any steps to stop the abuse, Defendants informed the father that his children had reported the abuse.  This led to further abuse by the father.  In exchange for the conspiracy of silence, the abusive father paid to send Defendants Mahaney, Ricucci and Layman and their families on vacation to the Kiawah Islands, South Carolina.

158.  On or about September 17, 2008, Plaintiff Grace Goe again reached out the Defendants, seeking assistance in preventing the ongoing abuse of her siblings. Defendants failed to report or take any other steps to stop the ongoing and severe abuse.

159.  In May 2010, Plaintiff Grace Goe again sought help from Defendants Layman and Ricucci, as she was concerned that her father was continuing to abuse the children remaining in the house.

160.  On May 14, 2010, Defendants conspired to mislead Plaintiff Grace Goe into believing that they would finally assist in ending the abuse.  Defendant Grant Layman affirmatively made misrepresentations in writing to Grace Goe, assuring her that “[a]fter the pastors discussed this situation, the bottom line is, we feel a moral obligation to report.”

161.  Yet this was a falsehood.  Defendant Layman and his co-conspirators again failed to report the abuse and instead continue to assist the wealthy father in avoiding any consequences for his ongoing abuse of his children.

Google “Attorney Susan Burke believes they have the evidence to prevail” and you will find the statement below. I now know it to be true because I read it about C.J.

“Well if you look at the contrast between what C.J. Mahaney and the various church leaders have stated about the flat denials and then you look at the sworn, under-oath testimony  that came out in the Morales trial you see a clear discrepancy. Obviously we are hopeful we will get  to a trial, in which case all the testimony will be under oath and we believe we have the evidence needed to prevail.”
Susan L. Burke, lawyer for the plaintiffs in the class action lawsuit against C.J. Mahaney and SGM.

Google “Will Mahaney face lawsuit in Virginia” and you will find that Susan Burke  is committed to continuing the fight as far as she can.  I now know it to be true because I heard it from Susan Burke.

Google “Should Mahaney and other SGM pastors fear criminal charges” and you will find that Susan Burke believes it to be likely that there will be more criminal prosecutions.  I now know it to be true because I heard it from Susan Burke.

Google “Mahaney Shepherds Conference” and you will find out Covenant Life Church was a great church because there was an emphasis on humility, especially among its leaders.  I now know it to be true because I heard it from C.J.

Google “Mahaney blackmails Tomczak” and you will find this transcript of the phone conversation. I now know it to be true because I read it about C.J.

C.J. ―Doctrine is an unacceptable reason for leaving P.D.I

Larry ―C.J., I’m not in sync with any of the T.U.L.I.P., so whether you agree  or not, doctrine is one of the major reasons I believe it is God’s will to  leave P.D.I. and it does need to be included in any statement put  forth.

C.J. ―If you do that, then it will be necessary for us to give a more  detailed explanation of your sins.

Larry ―Justin’s name has been floated out there when there’s statements  like revealing more details about my sin. What are you getting at?

Larry ―C.J. how can you do that after you encouraged Justin to confess  everything; get it all out. Then when he did, you reassured him – You have my word, it will never leave this room. Even our wives  won‘t be told. I repeatedly reassured him: “C.J. is a man of his word.  You needn’t worry.” Now you‘re talking of publicly sharing the  sins of his youth?

C.J. ―My statement was made in the context of that evening. If I knew  then what you were going to do, I would have re-evaluated what I communicated.

Doris ―C.J., are you aware that you are blackmailing Larry? You‘ll make  no mention of Justin’s sins, which he confessed and was forgiven of  months ago, if Larry agrees with your statement, but you feel you  have to warn the folks and go national with Justin’s sins if Larry pushes the doctrinal button? C.J., you are blackmailing Larry to say what you want! ―Shame on you, C.J.! As a man of God and a father, shame on you!  This will send shock waves throughout the teens in P.D.I. and make many pastors’ teens vow, “I‘ll never confess my secret sins to C.J. or  any of the team, seeing that they‘ll go public with my sins if my dad  doesn‘t toe the line.” ―C.J., you will reap whatever judgment you make on Justin. You  have a young son coming up. ―Another reason for my personally wanting to leave P.D.I. and never  come back is this ungodly tactic of resorting to blackmail and  intimidation of people!

C.J. ―I can’t speak for the team, but I want them to witness this. We’ll  arrange a conference call next week with the team.

Doris ―I want Justin to be part of that call. It’s his life that’s at stake.

“After writing us and later the same day, Steve (SGM Board Member Steve Shank) talked to Chip Grange, our (SGM’s) legal counsel, to get his perspective on the sharing of this information. Steve sent us the following notes regarding whether or not we should reveal details regarding the child‘s sins.

Steve‘s Notes Regarding Counsel from Chip Grange
10/14/97
Gentlemen, here is a bullet form synopsis of our lengthy conversation.3623. Re: us divulging [the child‘s] sins if necessary. He said this is the shakiest part of our perspective. Would STRONGLY recommend we jettison the idea. Court would recognize our responsibility for Larry because he was an employee. [His child] was not an employee. Even though he was a [child] of an employee, it doesn‘t matter. If we divulged what was shared in confidence in a pastoral climate of counsel and confidentiality, we would be very vulnerable…

9. Regarding us disclosing [the child‘s] sin, there is a big red flag here. Even if we state more than Larry has said in his May 15 letter, there are major cautions. Strong recommendation we do not divulge [the child‘s] sins to any degree in any fashion. He was not an employee and we are not responsible for [the child] (legally) unless that has been delegated to us by [the] parents, which it wasn‘t. Voiced major reservations that we do this. We would be vulnerable if we did…

11. The courts would see a strong line of demarcation between divulging Larry‘s sins and revealing [the child‘s].”