“Woe to you, scribes and Pharisees, hypocrites! For you are like whitewashed tombs which on the outside appear beautiful, but inside they are full of dead men’s bones and all uncleanness. So you, too, outwardly appear righteous to men, but inwardly you are full of hypocrisy and lawlessness.”
Matthew 23:27-28 New American Standard Version

“I’d dare say this comes under the category of “false gospel.” Yes, I said that about Piper. False Gospel. If the Gospel is good news to the poor, release to the captive, and freedom for the oppressed, then Piper is someway, somehow minimizing sin’s awful destruction to the human soul. He might have a lot to say about a theology of justification, but the Pharisees had the right answers, too. 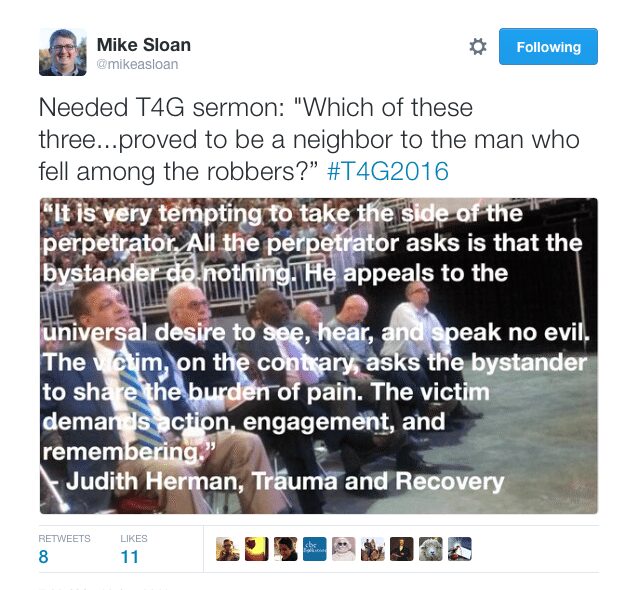 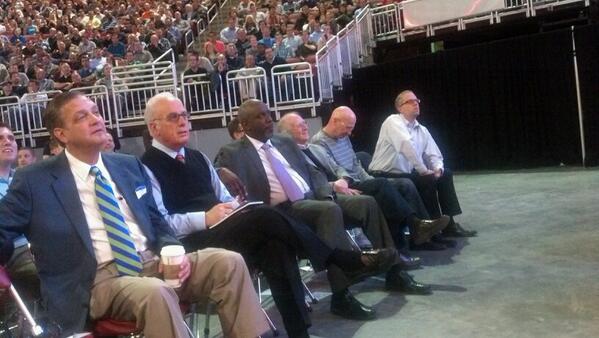 C.J. Mahaney sitting in the front row of the Together For the Gospel conference in 2014. Forced out of the conference because of his role in covering up the sexual abuse of children in 2014, the celebrity conference speakers were happy to show their support for Mahaney. L to R – Albert Mohler, John MacArthur, Thabiti Anyabwile, John Piper, C.J. Mahaney and Kevin DeYoung. 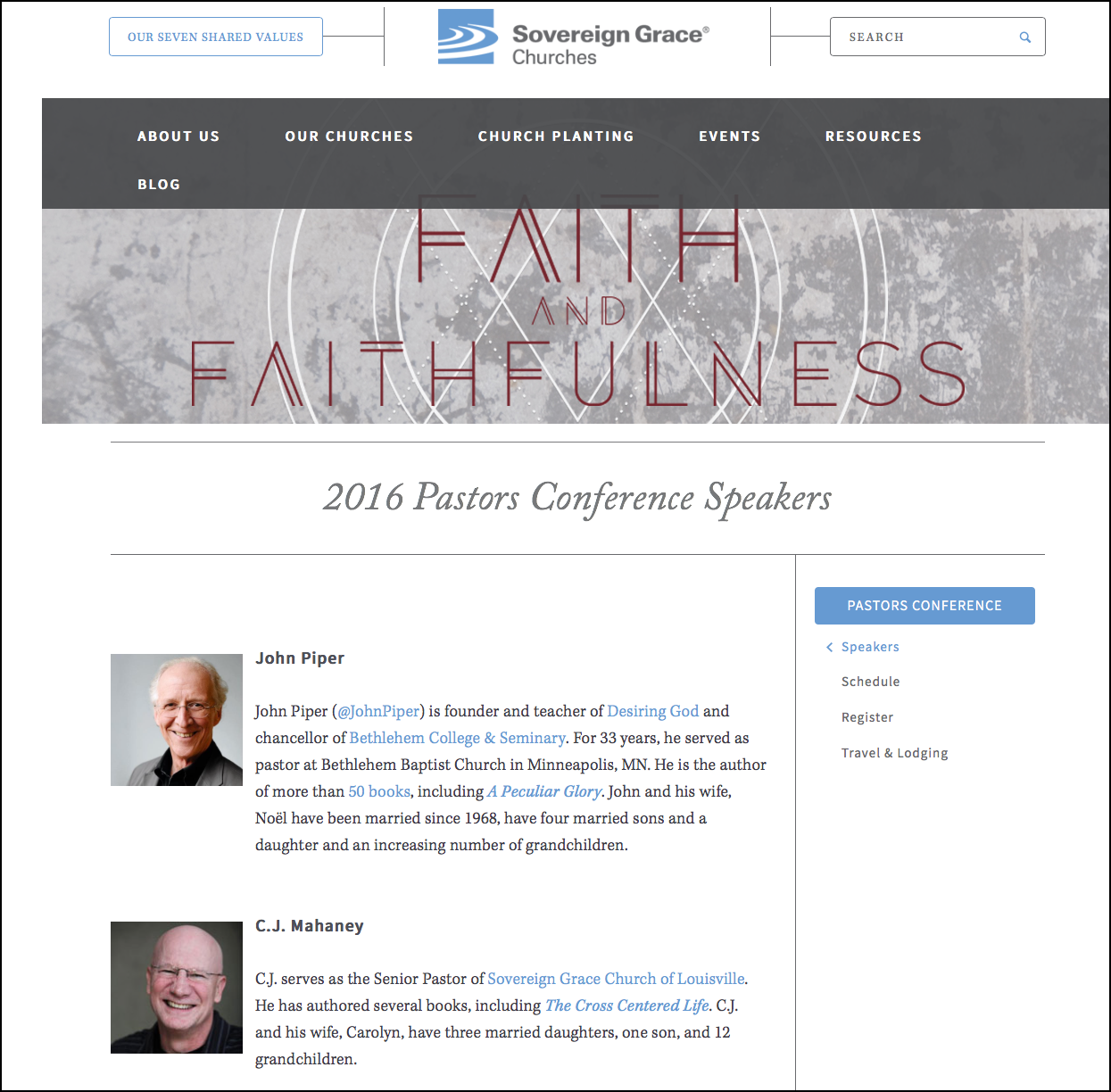 Guy pals C.J. Mahaney and John Piper are together again! They will be on the conference stage for the 2016 Sovereign Grace Churches Pastor’s Conference which will be held at the Indianapolis Marriott East hotel, October 25-27.

You may recall that when C.J. Mahaney fell from his top position of power in the Sovereign Grace denomination because of credible accusations of blackmail and covering up numerous cases of sexual abuse of children, he fled Covenant Life Church – the church he formerly referred to as “the happiest place on earth” and spent some time attending Mark Dever’s Capitol Hill Baptist Church. That undoubtedly proved problematic for Mark Dever, the head of the 9Marx movement, whose primary plank is church discipline and not allowing members to leave their home church to escape discipline. So Mahaney gathered up his extended family and a handful of devoted fans and was able to prevail upon the flunkies who had taken over leadership in Sovereign Grace, to officially sponsor a new church plant in Louisville, KY.

John Piper, a close friend of Mahaney’s, and a notoriously poor judge of character, (witness his friendship with Mark Driscoll, Doug Wilson, Rick Warren and R.W. Glenn) obviously not the least bit concerned with the numerous sexual abuse victims who had filed a class action lawsuit,  soon showed up at Mahaney’s run-away church plant to give him a ringing endorsement.  Here is what he had to say:

As the heat on Mahaney increased John Piper felt compelled to distance himself from the Humble One. In July, 2013 Piper quietly removed Mahaney from the speaker line-up of the CROSS Conference to be held in late December of 2013.

John Piper must now feel that enough time has passed; the rock-throwing peasants have forgotten all about C.J. Mahaney’s sordid past. Piper now feels he can share the conference spotlight with Mahaney without having any negative consequences. Sorry Dr. Piper, but we will not forget the victims of sexual abuse that Sovereign Grace Churches have kicked to the curb, and we will do our best to not let you forget either.

“Integrity and honesty in unbelievers is like the seashell of holiness. There is beauty still, but no life. Vestiges of Imago.”
-John Piper

What say you, John Piper; did you really mean it when you said “One of the hardest things in life is the suffering of children, and the suffering of those who love them” or can you easily reject that sentiment in favor of supporting one of your close friends, dare I say a fellow “professional” in the ministry; a friend whose covering up of sexual abuse of children has caused untold hurt to many children and those who love them?

Actions speak louder than words Dr. Piper.  Will you once again “snatch” the chance to support your close friend C.J. Mahaney or will you do the right thing and cancel your speaking engagement at the Sovereign Grace Churches pastor’s conference?

A few facts to refresh your memory lest you think C.J. Mahaney’s statement  of denial was true: 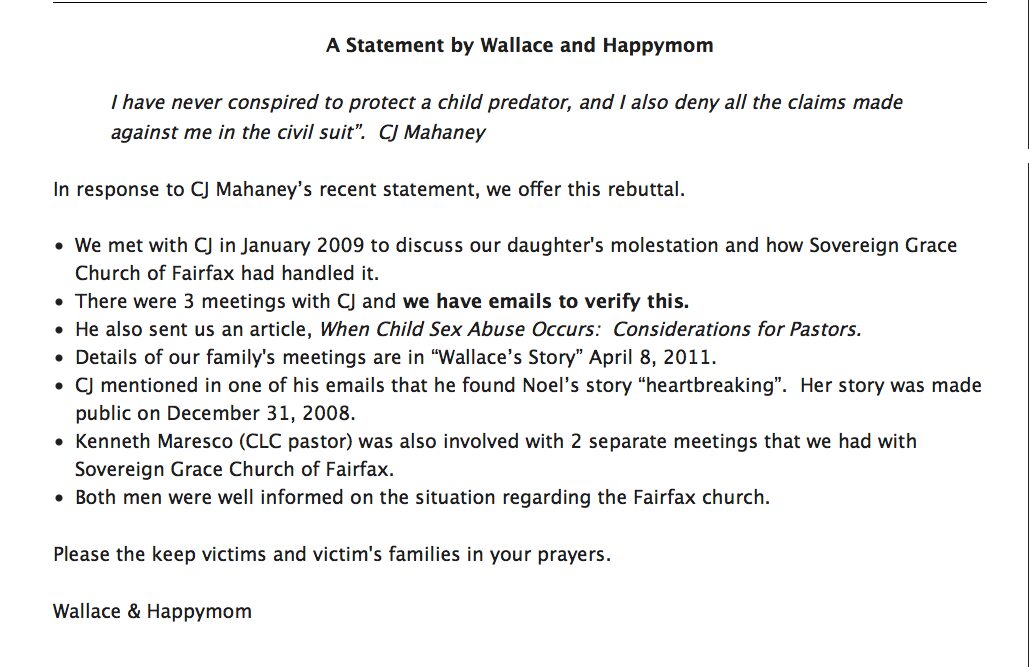 Below is a partial listing of the allegations filed against Mahaney and several other Sovereign Grace leaders and the denomination. The entire document can be read at Brent Detwiler’s blog site. The lawsuit was dismissed  on a technical issue, the judge ruled that it did not meet statute of limitation restrictions. No ruling has been made on the veracity of the allegations, although several individuals have been prosecuted and found guilty of sexual abuse of minors.  Reportedly the case will be refiled on behalf of several of the complaintants who meet the statute of limitation resctrictions in the state of Virginia.

“But you can still sleep easy at night knowing this important truth: blessed are the celebrities, for they will be rigorously held to a much lower standard of behaviour than the rest of us.”
-Carl Trueman, “If The Top Men Take Over, Who Will Ask The Hard Questions?” The Aquilla Report, November 26, 2013.

Below is a powerful testimony from a woman who was sexually abused by a pastor. It would be great if John Piper and the other “Christian” celebrities who support C.J. Mahaney would view it.

Notice that while Piper’s bio includes his notable associations over his career as a pastor (Founder of DG, Seminary Chancellor, etc) , Mahaney’s bio only mentions his current position at SG Louisville. No mention of the fact that he co-founded Sovereign Grace Ministries or led CLC for years. In fact, this has been a consistent pattern since CJ returned to the conference circuit. I first noticed it when he was announced as a speaker at Rick Holland’s Anchored Conference in 2014. CJ’s peers on the stage had detailed full-paragraph biographies while his was strangely sparse- just a few lines.

I think it’s pretty obvious that organizers don’t want conference-goers to dig into Mahaney’s past. Which raises the question: If you’re embarrassed by what people might find if they start Googling “Covenant Life Church”, why are you inviting this man to preach at your conference?

Good observation Edward. It’s probably just because Mahaney is such a humble man! ?
I think the whole Sovereign Grace leadership is attempting to hide their past. Why the change from Sovereign Grace Ministries to Sovereign Grace Churches? They have also purged nearly everything from the past off of their website.

And Desiring God Ministries is clearly not interested in receiving feedback from the minions. There is no “contact us” link on their website. Although, they’re eager to take your money. I notice they do have a “donate” page, which takes credit cards and for those who’d like to send a check, they provide a mailing address.

Many in the celebrity club aren’t interested in hearing comments from the rabble. I noticed Mohler and Challies both state at the end of their blogs that while they don’t have a comments section you can write a letter to the editor! I totally disagree with this policy. I believe this is purposefully done to keep anyone from questioning them or realizing that there are many people who disagree with them. It cannot be a time issue, at least with Mohler, because he has those who are eternally subordinate to him doing his research and handling his blog. But yes, of course, they always make it quite convenient to donate your hard earned cash – modern day Tetzels!

Todd- re the video at the end- is this girl a former SGM member/victim? She speaks of her manipulating abuser now pastoring at another church. I was wondering if you are free to elaborate.

Re Piper- so sad. I still occasionally pull out his biographies and give them a re-listen. For many years my husband got his weekly sermon CDs in the mail. One of the greatest preachers I ever heard.

Hubby says that starting around 2000 there was a noticeable slide in tone- a harshness began to creep in that hadn’t been there before, and it got steadily worse. We stopped listening to him. I suppose hooking up with CJ and Driscoll was all part of something going drastically wrong.

Reminds me of the story of Solomon and the tragic end of his life. I pray all the time that God spares me such a fate. I think you have to keep your heart concerned for the little guys and not the cliques at the top. Maybe faithfulness with money is part of it? I don’t really understand how these things happen, especially when the truth seems so obvious and concerns sex abuse of children.

5 Years,
Thanks for the comment, I don’t know what church the woman in the video is from. I attempted to view her blog but the link did not work. I thought her video was quite powerful. How these pastors can ignore this major problem is beyond my comprehension.