Pamela Palmer is a friend of mine. Her daughter was sexually abused while attending Covenant Life Church.  At that time Covenant Life Church was the flagship church of Sovereign Grace Ministries.  If you have been following the sexual abuse scandal in Sovereign Grace Ministries, what some have called the largest scandal of its kind in Evangelical Christianity, you will know that there was a civil suit filed by 11 victims in this case.  The lawsuit was dismissed due to the limited statute of limitations which exists in the state of Maryland.

Pamela Palmer recently testified in favor of extending the statute of limitations  in front of a committee of the Maryland Senate.

I extend my thanks to Pamela Palmer for her tireless and courageous efforts on behalf of her daughter and all victims of sexual abuse.  She is a fighter and because of people like her justice is being extended for the powerless.

The entire video of the testimony can be seen here. 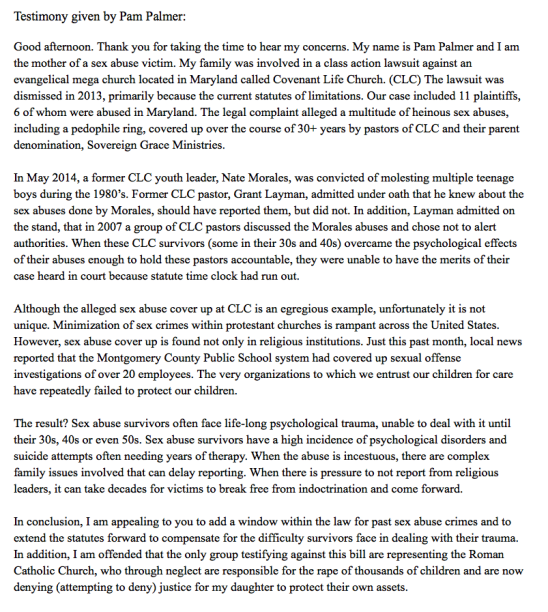