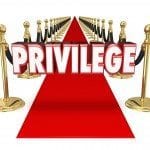 “The North American evangelical/fundamentalist brand of Christianity is the religious version of the American civil religion: consumerist individualism. Today’s “Stylites” are more often found in private jets, but they still have followers who conflate holiness with success American style – in other words, as measured by money, possessions, numbers, and (above all) celebrity status.”
-Frank Schaeffer, “Patience With God,” page 91

“Those who are most effective at pitching and parsing propositions are held in high esteem. We typically reward these communicators with prestigious titles, perks, and the largest salaries. Then we assuage our consciences by repackaging public preaching as a disciple-making experience when it is clearly one of the least important pieces of the spiritual formation process. The essence of church life has been boiled down to hearing one person give a speech. But, where is this model revealed in the New Testament? ”
-Jim Henderson and Doug Murren. “Question Mark.” iBooks.

Tomorrow morning, June 7, 2015 marks three weeks since Joshua Harris officially left Covenant Life Church, the former flagship church of the Sovereign Grace denomination.  The church was originally pastored by C.J. Mahaney, he termed it the “happiest place on earth” while he was at the helm.  Mahaney eventually passed the leadership mantle to his hand-picked successor, Joshua Harris.  Both men were celebrities of sorts.  They had both authored books popular in Christian circles and both were frequent speakers at conferences.  Then in 2011 a major sexual abuse scandal and cover-up involving Mahaney, CLC and Sovereign Grace Ministries came to light.  The “happiest place on earth” didn’t seem to hold much happiness for Mahaney and he fled CLC for a “season of reflection” at Mark Dever’s Capitol Hill Baptist Church, and later he attended another Sovereign Grace church.  Ultimately Mahaney fled the Washington D.C. area to “plant” a church in Louisville, KY. Joshua Harris was instrumental in CLC’s decision to leave the Sovereign Grace denomination.

With the criminal trial of former CLC member Nathaniel Morales, Joshua Harris was shown to have lied about the fact that church leaders knew sexual abuse had occurred and had not notified law enforcement. At this point it became fairly obvious that it would only be a matter of time before Joshua Harris would be gone. 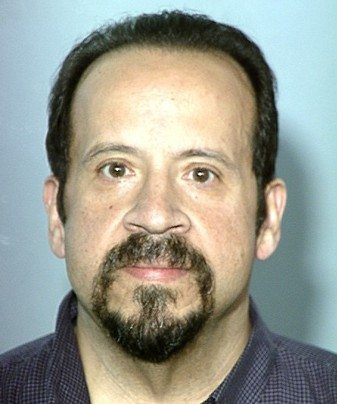 “In an interview, Harris said the isolation of Covenant Life, and of a small cluster of churches of which it was a part, may have fed leadership mistakes, including the decision of pastors — himself among them — to handle a child sexual abuse case internally instead of going to police.

A former Covenant Life member who helped with the youth group was convicted last year of molesting three boys in the 1980s. Trial testimony showed that the victims or their families had gone to church leaders for help and that the church officials did not call police. Harris said the thinking of the church was that such allegations should be handled as an internal, spiritual issue.”
-Michelle Boorstein, The Washington Post

I say all this to simply show that Covenant Life Church is a microcosm of the greater evangelical church in the United States.  The celebrity culture reigns supreme.  Covenant Life Church has only had two senior pastors in their relatively short history, but both of them were celebrities.  It seems they must have celebrities to keep attracting people to their church.  What does this say about the state of the evangelical church, more specifically, what does it say about the average church-goer in evangelical Christianity?  It is obvious that the two former celebrity pastors have not worked out very well, yet word is that the pastoral search team at CLC has been attempting to find another “big name” pastor to hire as a replacement for Joshua Harris.  To date they have not found any takers. With the financial mess the church is in, along with the threat of further criminal prosecutions and civil lawsuits, about the only celebrity I can think who would probably accept the job would be the embattled Mark Driscoll!

In the meantime the salaried pastoral staff of ten is either so fatigued by having to shoulder the preaching load after Harris’ exit three weeks ago or attendance is lagging so badly that church leadership have chosen to do the only thing they know how to do – get a celebrity back in the pulpit.  Filling the role tomorrow will be David Platt. (I wrote about his disingenuous ploy to sell one of his books a few years ago here.) I imagine CLC is busy attempting to secure other celebrities for future weeks. 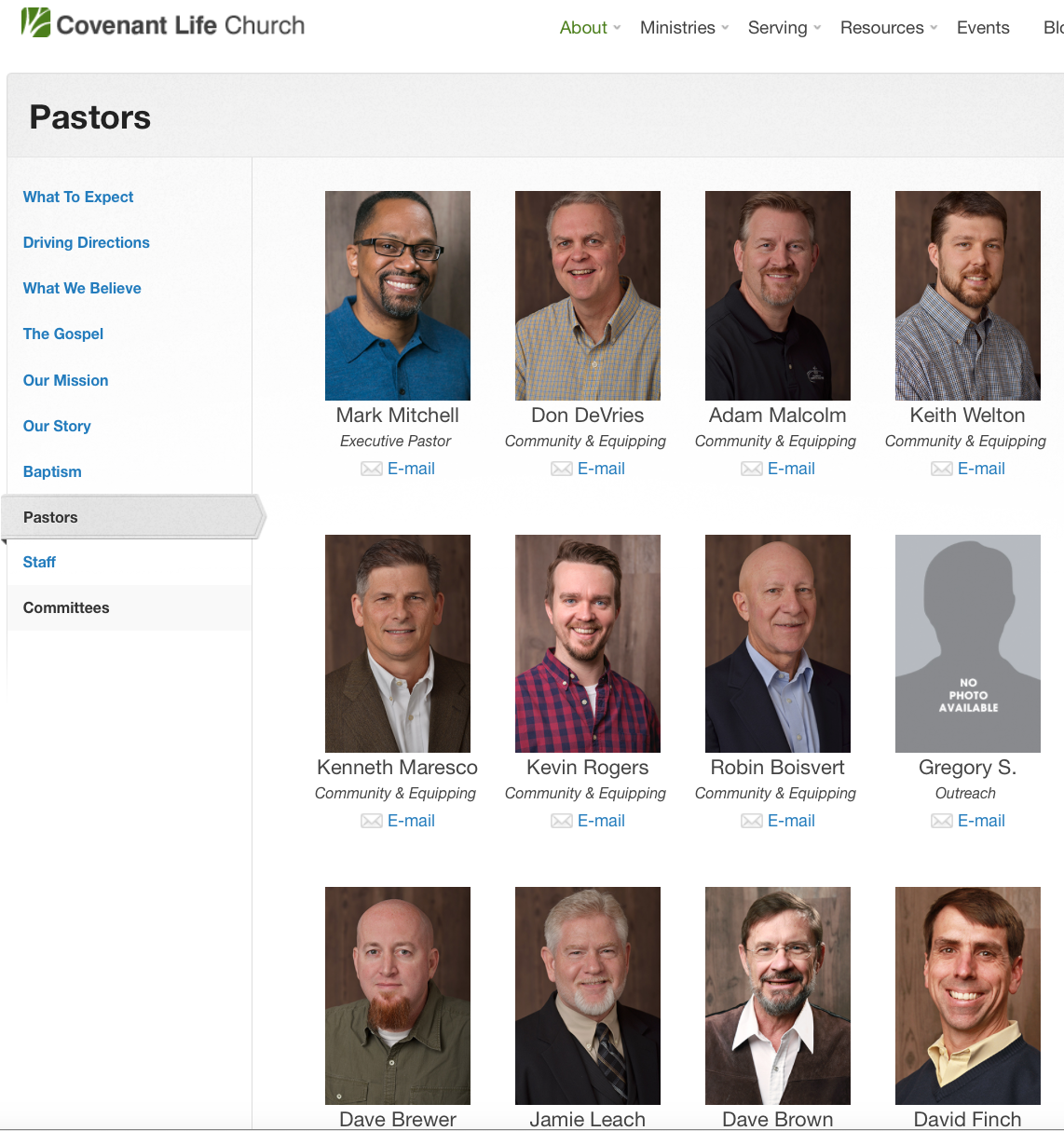 I have featured these two audios in prior posts, but they apply in this situation and warrant repetition.

I read that Covenant Life Church has chosen P.J. (rhymes with C.J.) Smyth as their new Senior Pastor.  Apparently church leaders couldn’t find a big enough celebrity from the pool of pastors in the USA , so they conducted an international search and found a man from South Africa.  Smyth, virtually unknown in the USA, is apparently a celebrity preacher in SA.  The choice to select a foreigner poses some unique problems, detailed in the letter below.  So the beat goes on! 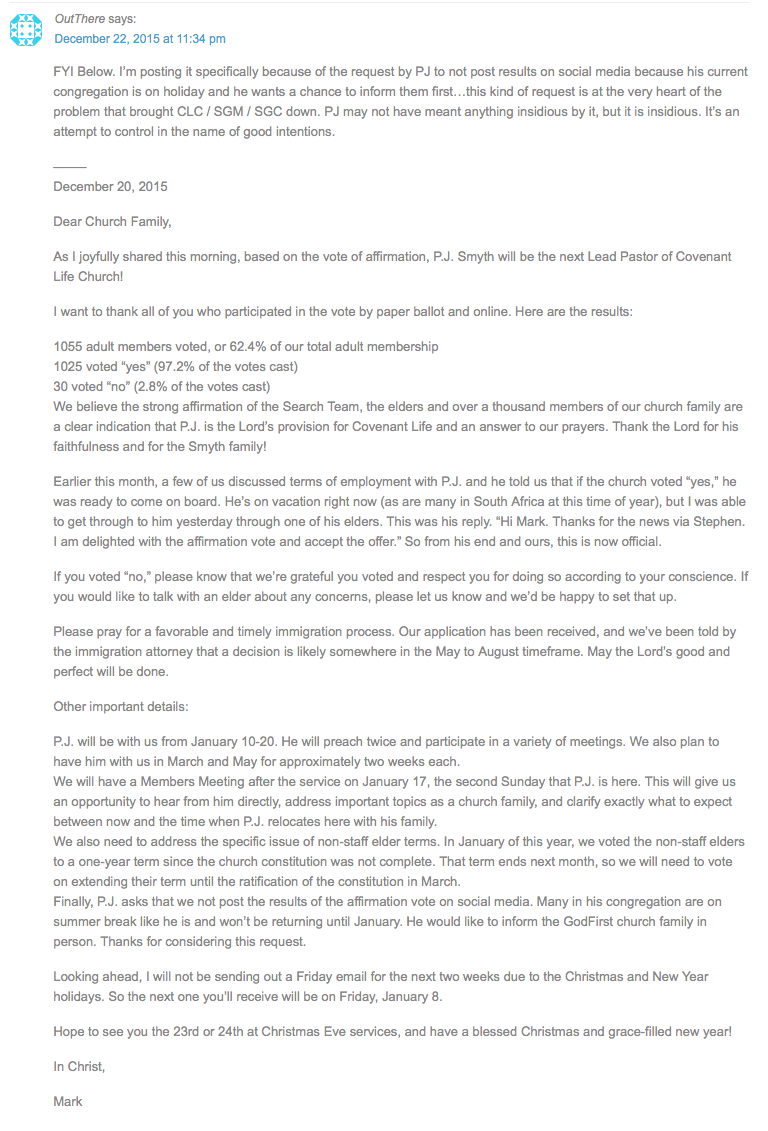 I have to admit I got a chuckle thinking about Mark Driscoll as pastor at CLC. Imagine the posts, the controversies…!

It seems strange to say but I think that Platt and other 2nd-tier or 3rd-tier YRR celebrities may be considering taking over CLC.

Platt’s splashy arrival, so soon after Harris’ departure, is interesting, as Harris is not on good terms with the Neo-Reformed world he ditched for Regent Seminary/Canada.

No sane person would want to get into CLC’s legal messes, but these YRR guys live in their own world and think the lawsuit is over/never bothered to read it in the first place.

And a ready-made mega-Church would be a prize for someone unlikely to make it to the A-list of Evangelical celebrities anytime soon.

One thing’s for sure: Those CLC Pastors better get someone with a personality in their soon, as I don’t see folks getting out of bed for Maresco, Mitchell, and Boisvert for long.

Those guys are a snore.