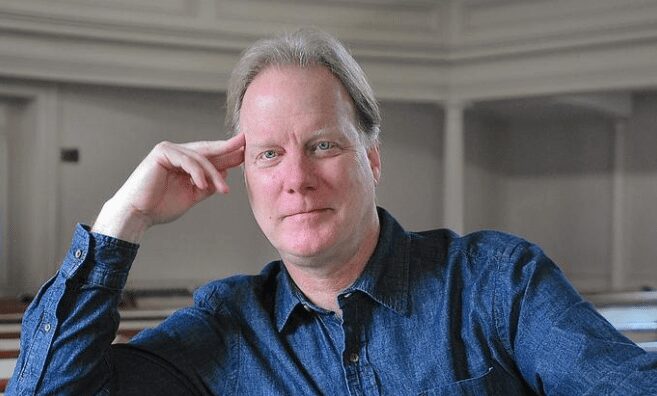 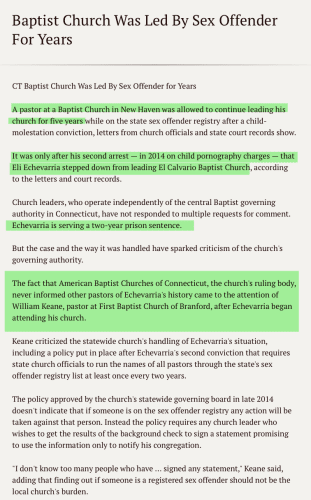 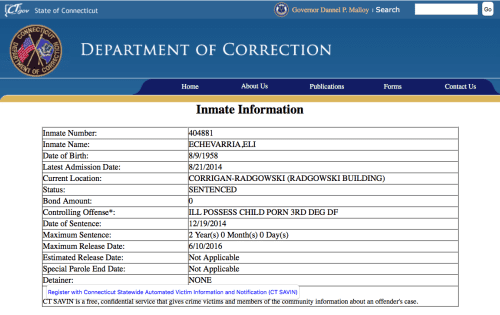 I came across a great article today in the Hartford Courant. Pastor Bill Keane learned his denominational leaders not only covered up abuse by a pedophile but praised the perp!  Outraged, Keane boldly spoke out against this travesty. In a world where we see Christian celebrities like Ligon Duncan, Albert Mohler, Mark Dever, John Piper, Thabiti Anyabwile, and Kevin DeYoung rush to the defense of their friend C.J. Mahahey, it is rare, but refreshing to find a principled pastor today who has the moral fortitude to speak out against injustice, no matter where he finds it.   Would that more Christian leaders had the courage to act on their convictions.  Thank you, pastor Keane!  Read the full story at the Hartford Courant web page.

It is also interesting to note that Christians who find themselves on the wrong side of the equation when it comes to displaying Christ-like behavior invariably rely on some form of legalese-speak to justify their behavior.  Below I submit two such examples:

“Under the law pastors are not required reporters. When these kind of things started to come to light (the abuse of young boys by Covenant Life Church member Nathaniel Morales) the pastors were not and still are not required to report.”
-Charlotte Ennis, (wife of influential CLC member Pat Ennis) testifying in front of Maryland Senate subcommittee hearing in opposition to a proposed bill which would extend the statute of limitations on civil cases of sexual abuse.

Indeed, in the previously mentioned letter from our regional president, relative to not informing local pastoral leadership about Echevarria’s history, he said that the ABCConn executive minister at the time had contacted church legal counsel, who told her that “there is no statutory requirement to make public information more public.”

Therefore, instead of receiving a responsible explanation for leaving local leadership out of the loop, it was fancy legalese with no biblical or ethical basis.
-Baptist pastor Bill Keane relating why American Baptist Churches of Connecticut leaders failed to inform denominational pastors of a pedophile in their midst. 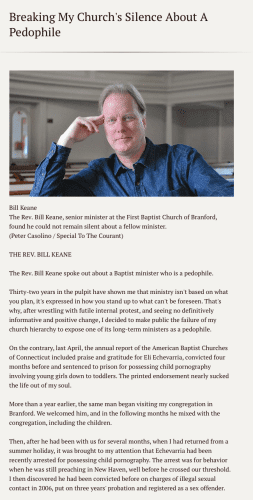 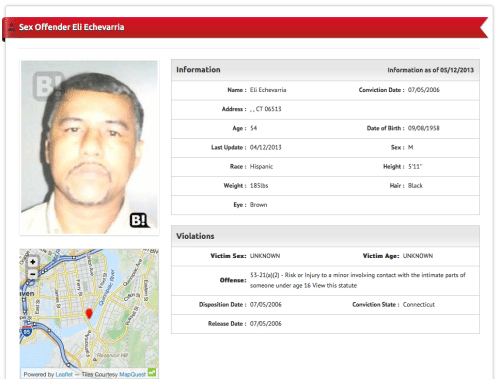 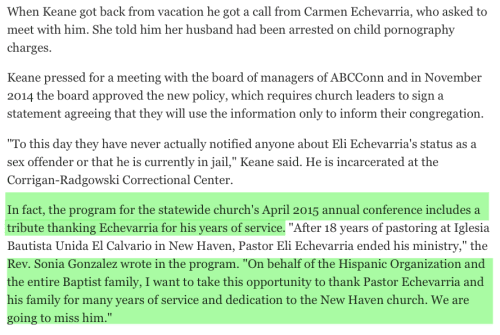 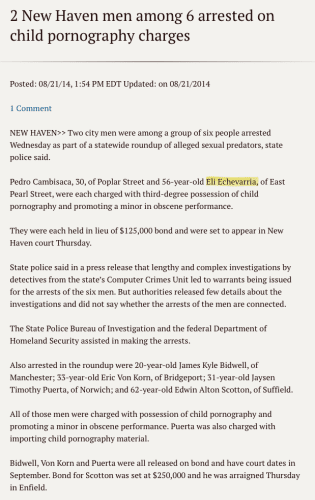 I’m so glad pastors all around the country are starting to stand up to protect children!
From another church:
Here’s a very informative podcast by a pastor and his mom on dealing with pedophiles in a church setting based on their past experience:
http://thisliminalstate.com/…/tll-25-beth-holt-on-protecti…/
Intro. starts at 5:27
Interview starts at 10:00

Thanks, Pam. I think that more Evangelical Pastors are addressing preventing or reporting child abuse, generally, but I believe there are only three who have specifically taken on Mohler, Inc./The entire SBC.

I realize that Bill Keane doesn’t seem to have directly criticized T4G but his strong public stance regarding the behavior of the denomination will annoy them.